Is Raku Preparing to Debut a New Teppan Restaurant? 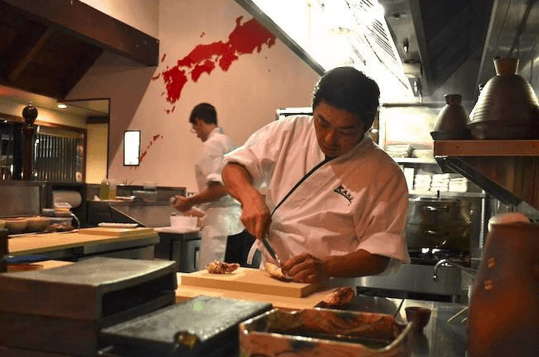 A third local outpost for the award-winning Raku?

Yet to be confirmed, but looking a very strong possibility, award-winning Japanese
restaurant Raku appears to be making very quiet plans for a new concept to debut less
than two miles from its Chinatown home.

Long rumored to be expanding, Aburiya Raku as it is officially named, has been a
must-visit off-Strip destination since 2008 for chef Mitsou Endo’s tofu, omakase
menu, and robata dishes grilled over charcoal.

Paperwork was first filed back in April and revived earlier this month for the creation
of Teppan By Raku, suggesting a future menu focused and prepared on a flat, iron
griddle.

Located at the Flamingo Arville Plaza next to the Palms resort, the strip mall sits at the
intersection of Flamingo Road and and Arville Street and is home to Umiya Sushi and
the now shuttered Izakaya Cocokala Japanese restaurant.

W G Constructors have been assigned to the project and earlier this year an estimated
budget of $210,000 was allocated to cover construction costs on the 1,200-squarefoot makeover. The firm has previously worked with Raku to complete its long planned
patio extension at the compact and always busy original location.

Teppan would become the third local outpost for the team. The highly inventive
Sweets Raku debuted a short walk from Raku in 2013, continuing the reputation of the
Seoul Plaza on Spring Mountain Road as a beacon of culinary creativity. A California
expansion for the main restaurant to West Hollywood followed in 2015.

Further details of the new space, or an estimated timetable for completion, have not
been revealed.